Afrika Korps walks this line pretty well but still suffers from too much specialization, particularly among infantry units, to be easily comprehensible. The few shortcomings in.

Of all the WWII conflicts, the campaign in Africa is probably the most overlooked. In fact, not that many people know much about it, so if you're one of the many who spent more time blowing soggy paper balls through hollowed-out biros at your classmates than you did listening to your Fisherman's Friendsmelling history teacher, here's a quick bit of background info before we get started on the game. 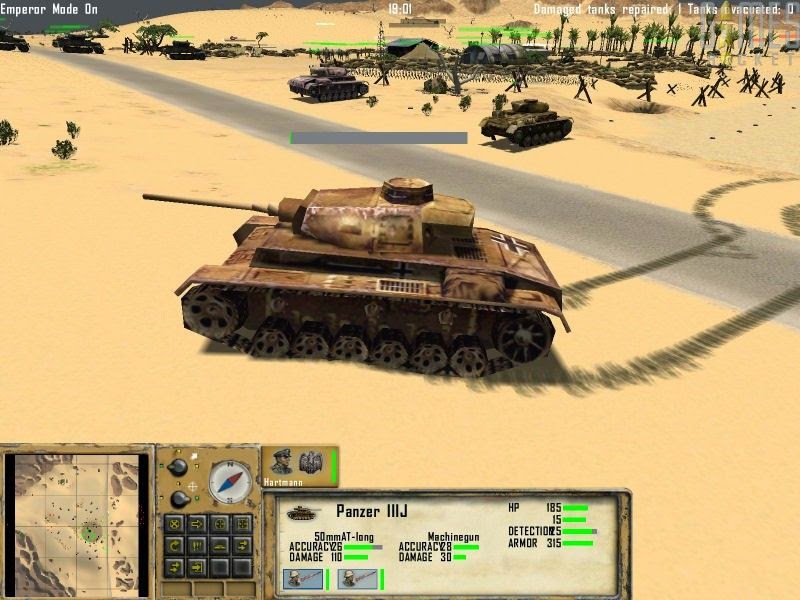 After the French capitulation in 1940, the Italians and Germans turned their attentions to North Africa. The battle swung backwards and forwards for the best part of three years, mainly between General Erwin Desert Fox' Rommel's Africa Korps and General Bernard Montgomery's Desert Rats, with the Allies eventually coming out on top. But only just.

Clearer now? Good. On to the game then, which, having spent a great deal of quality time with the latest preview code (we went to the beach, had an ice cream, raced on the go-carts...) we can confidently say is looking a bit tasty. Indeed, this 3D RTS could be one of the surprise packages of the year.

Divided into two, ten-mission story-driven campaigns - Axis and Allies - you play as either a stiff-upper-lipped English or Chippy-bombing German hero. It's striking just how much Desert Rats reminds us of isometric RTS classic Sudden Strike, only in 3D.

Bereft of resource management, you're left to concentrate on the more tactical and subtle aspects of warfare, picking your units before the start of each level and later being backed up by an array of reinforcements.

With troops in such limited supply, it'll be essential to utilise your surroundings to gain maximum advantage. If you're to stand any chance of success, you'll have to master such skills as digging into the sand for extra cover, assuming an elevated position to help outgun and out-manoeuvre the enemy, and flanking them (where their armour is weakest) with the ferocity of a boarding school headmaster trapped in a dark room with a small yelping boy.

Desert Rats' engine is also pretty damn impressive, with a fully interactive and deformable landscape that enables your tanks to mow down trees, kick up plumes of sand with their caterpillar tracks and level buildings to dust with their awesome firepower.

But it's not all just about tanks, with good old salt-of-the-earth soldiers playing an integral role in the proceedings, too. Flame-thrower units can incinerate entire squads of enemies with one twitch of their clammy finger, or turn trucks into moving bonfires. Medics heal, bazooka troops can stop the mightiest of motorised beasts and best of all, your hero - who you must preserve at all costs - gives nearby troops a huge combat bonus. And as if that wasn't enough, you'll even be able to call in air strikes to aid you if it's all looking a bit ropey on the ground.

It's Hell Out There

Some of the missions in the current build are truly spectacular. One sees you landing on a beach, enemy mortar fire cascading down around your vulnerable foot soldiers, sending spirals of sand arching into the air along with broken, bloodied bodies, while gut-twisting explosions ring out around you.

Another sees you racing across the desert, your massed columns of tanks kicking dust clouds into the sky, a beacon of hope to the besieged force you're racing to rescue. On arrival, you tear into the enemy backline, using sand dunes to gain elevation and the upper hand over the superior-sized German ranks.

In familiar RTS style, there's also an escort mission through enemy-infested territory, which sees you protecting a precious cargo as enemy shells from tanks and mortars try to break your ranks. Still another sees you embroiled in street-by-street combat in a desert town, your machines of war being sent sky-high by rockets from cunningly concealed enemy forces.

There may not be many games based on the African campaign in WWII, but from the looks and feel of what we've played, Desert Rats could kick up quite a storm on its arrival. That said, it would benefit from some better voice-acting (which we've been promised will be in place in time for release) and a freer camera. And while the scripted in-mission sequences work well enough, it'll also be interesting how much replayability the game will offer as a result.

Still, we have high hopes for this one, and when the review code scuttles in next issue, we could well rat(e) it highly. See what I did there? Oh dear, that was misjudged...